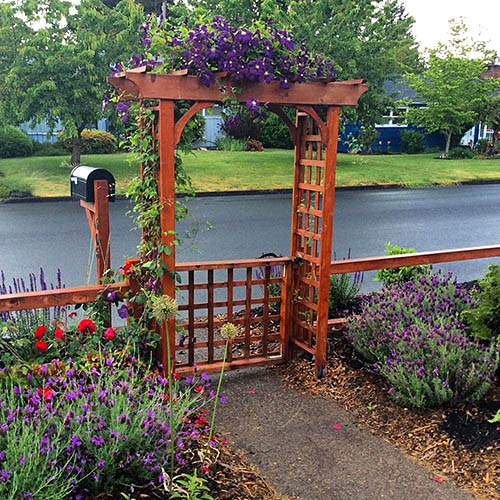 Ah, June in the Pacific Northwest! It is kind of like April in Alabama - it seems like everything starts to bloom overnight. Here, the rainy season begins to fade, sunnier skies begin to appear and the temperatures climb into the 70s. Of course, that is "on average". There is an occasional hot day (upper 80s one day last week) and some cold, gray days (earlier in the week, it barely got out of the 50s). But, overall is it sublime.

There is a lot going on in our garden and I am pretty amazed at what all we have accomplished in just one year. That is the garden gate in the photo above and Clematis 'Jackmanii Superba' has reached the top and it blooming nicely. On the opposite side, 'Princess Diana' has been moved to the back garden and 'Madame Julia Corevon' has taken her place. She is already scampering up near the top and some buds are appearing. And take a look at that Spanish Lavender - it loves it here. The red rose on the left is 'Dublin Bay' and the blooms are beautiful but it really needs some help with climbing assistance. I have yet to do that.

'Princess Diana' would probably have been fine if I had left it alone but I am an impatient gardener. It has handled the transplant well and is beginning to bloom in the back garden -

I am discovering a world of new plants that I have never grown before. One of them is Cistus, a shrub of various sizes that like dry conditions. Since the summers here are typically dry, they do well if situated in a well-drained area. Cistus 'Decanso' is planted on a terraced slope that I am working on and it seems to be very happy.

I have grown very fond of Salvia and Penstemon. They performed so nicely last year and the hummingbirds love them. 'Amistad' is a new variety that I am trying. I hear that it is not reliably hardy here but that the huge blooms are worth growing it for, if for just a season.

I don't think I have added any new Penstemons this year but 'Windwalker Garnet', a favorite from last year, has returned with flying colors.


Kniphofia (Red Hot Poker or Torchlily) grows big and robust here. I have planted two and the first one to bloom (just starting earlier this week) is 'Shining Sceptre'.

I don't know why I haven't grown more Veronicas (Speedwell). We have several varieties at the nursery where I work and so far, I have only brought home one. This is Veronica 'Royal Candles'. I have this planted in the terraced bed and may have to move it to a more moist area later.

More spikiness - this is Primrose Orchid (Primula vialii), a return from last year. Despite the fact that this plant prefers moist conditions, it appears happy at the moment. It grows next to the urn fountain in the Pan Garden and though it resides next to a water feature, the ground isn't that wet.

The hydrangeas are just beginning to bloom. We only have a few so far (nowhere near the 30+ we had in our former garden).

You may be wondering - where are the roses? I think they deserve their own post. I will get to them later in the week!

Garden Bloggers Bloom Day is hosted by May Dreams Gardens. Check out what is blooming in other blogger's gardens around the world.