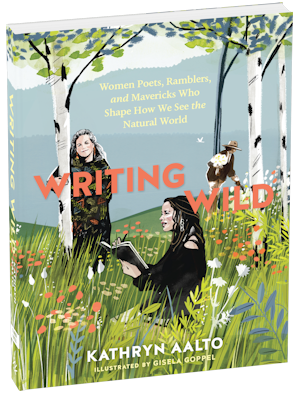 At the beginning of the nineteenth century, Dorothy Wordsworth avidly walked the mountains and vales of the Lake District. She even scaled the area's highest mountain, Scafell Pike, with a friend, maid and hired porter accompanying her. Her lyrical observations of the native beauty of the area were recorded in diaries that were written primarily to be shared with friends and family members. Later, they would be published as “The Grasmere Journal”.

This is the first of 25 women who are profiled in "Writing Wild" by Kathryn Aalto. Covering a diverse range of women from all walks of life (scientists, conservationists, writers, poets, spiritualists, etc.), these women influenced audiences with their observations of the natural world around them.

Some of the writings, such as those of Dorothy Wordsworth, were not meant for publication. She just wrote and shared her diaries with friends and family. Along with her famous brother, the poet William Wordsworth, both shared a fondness for the landscape around them. The chapter about Dorothy was one of my favorites. I found the following photo of Scafell Pike (not in the book) and was fascinated by the physical challenges of doing it - can you imagine her scaling this mountain in the dresses and garb they wore then?

Equally fascinating is Susan Fenimore Cooper, daughter of James, who wrote about the flora and fauna of the Hudson Valley region of New York. Her book "The Rural Hours" was published four years prior to Thoreau's “Walden” although today most people assume that Thoreau was the first to publish nature writings of the region. Despite a time when works by women were rarely taken seriously (indeed, many women's books of the day were credited as “Written by a Lady”), Cooper's book was well respected.


As captivating as the women are, I was also taken aback by the alarming insight into environmental happenings at the time. We see and hear of destruction and loss of habitats on a daily basis now, but apparently man's practice of tearing down nature was happening much earlier, a time when little or no regulations were in place. Gene Stratton-Porter, a highly popular novelist of the early 1900s, wrote impassioned pleas for her beloved Limberlost, a swamp in Indiana where her novels were set. Despite her efforts, 13,000 acres were lost to the Standard Oil Company as well as local farmers who cleared it.

I remember when I worked in the public library, there were rows and rows of Gene Stratton-Porter's book on the shelves. I did not know that she was- and these are the author's words - "a gun-toting, bird-loving, moth-chasing, free-spirited filmmaker and artist". Ha!

Although her romantic novels gained her great financial success (she owned several homes and cabins in both Indiana and California), her passion was her nature books that focused on birds and moths. She was also an accomplished nature and wildlife photographer. She had just formed her own movie production company when she died from injuries sustained in a car accident in 1924. She was 61.

Perhaps the most influential woman to push the alarm button on ecological matters was Rachel Carson. Carson was a marine biologist and first became aware of pesticide poisoning when she started investigating why birds were dying in a friend's garden. Her 1962 book “Silent Spring” was a huge bestseller and brought the practice of pesticide poisoning to the nation's consciousness. Her efforts paid off to some extent (DDT was outlawed as a result) but ironically, Carson died of cancer just two years after her book was published.


The book is beautifully illustrated with portraits by Gisela Goppel.