Nothing too pressing but a lot of odd jobs to get done, mainly getting container plants situated and planted. A day for puttering, a favorite activity. I would get much more accomplished if I focused on one task but I find myself stopping here and there and thinking about what needs to be done. Or seeing plants that need to be photographed so a rush to get the camera. I do lots of running back and forth.
The 'Sem' False Spirea is looking really beautiful. I recently dug it up and put it in a pot in fear that it would try to take over the garden. The roots had spread quite a lot.

The weather was nice today with the exception of a pesky wind. Otherwise, lots of sunshine and temperature in the 60s. It was also a day for watering which is distressing for such an early date. We are over 3 inches behind on rain and it will be getting 80+ degrees later in the week.
I'm not sure if I was annoyed or concerned when contemplating this - 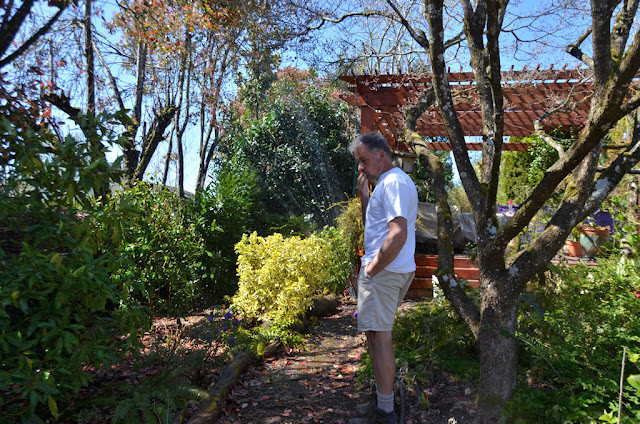 But back to work. New plants to be potted -
Being from the south where magnolias were so common, you would think I would have grown one by now. That isn't the case until now. This is Magnolia 'Baby Grand' which is a dwarf variety and is supposed to only reach 10-12 feet (even smaller than 'Little Gem'). I have a spot in mind for it along the back fence row but I think I will keep it in the pot for a season or two.
Another new plant that will be pot-grown is Pomegranate 'Crimson Sky'. I am excited about this and look forward to the orange blooms and perhaps fruit?

I moved some plants to larger pots. This included the Brugmansia and the olive tree.
I also brought out the few succulents that I have in pots. These spent the winter in the basement egress window. 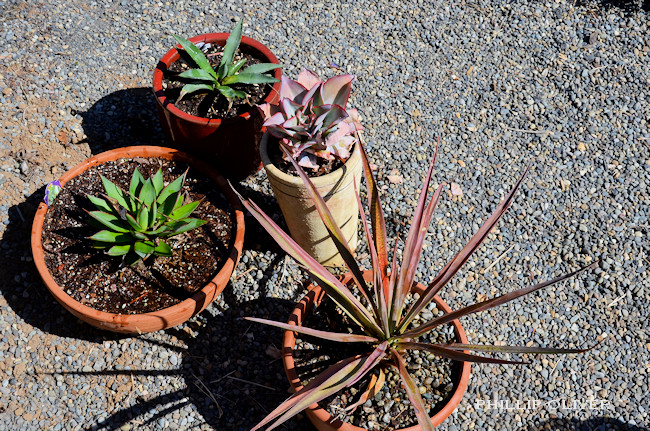 A major accomplishment was getting a rose planted in the spot where 'Iceberg' had resided. It was too aggressive for the pillar so I moved it back in December. A co-worker offered me 'Gertrude Jekyll' which I happily accepted. He also gave me another Austin rose called 'Tranquility' and since I have no good place for it in the ground, I'm going to keep it in the terracotta pot he was growing it in. This will be the first time I've grown a large rose in a pot.